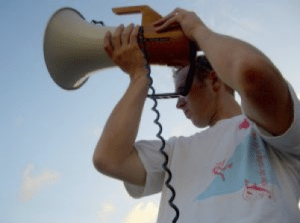 Communication Mistakes (and Their Fixes)

Many managers I’ve met think they’re better at communicating than they really are. Communication is hard. It doesn’t just happen. It has to be deliberately designed. Here’s a couple of suggestions mistakes to avoid, and how to be a better communicator (and therefore a more effective leader):

The Mistake: They Know What I Know

Other people cannot read your mind. They do not know what you know. They have not experienced what you have experienced. They were not at the retreat, training, or planning session with you.

That new employee performance review process? Your first email might be just for managers who will be performing the reviews; announcing the initiative, explaining the process, and inviting them to a training session. Tell them what you’re going to tell them…

Consider repeating this first step for different audiences. Your first communication to non-managers might be an “all-hands” e-mail announcing the initiative, explaining the process, and inviting people to an in-person information session (maybe a lunch-and-learn) where they can ask questions.

Now your managers are ready for the questions (because they’ve been trained) that will come from their direct reports.

After the review process is complete, you might consider having a “hot wash”, inviting feedback, and compare how the process was supposed to be carried out, and against what actually happened. Share this analysis. Tell them what you told them. Close the loop.

The Mistake: This Is What I Want Them To Know

Change freaks people out. Please think about who is affected and how. Try to think about it from your audience’s perspective and not just from your own. You will know what you’re trying to do means to the company or to you personally. But what does it mean to the people on whom the change is being imposed?

The Fix: Tell Them What It Means to Them

Every message needs a purpose. Every communication needs an intent. What’s the one thing that your audience wants to know? Not just what do you want them to know, but what do *they* want to know? Ask yourself, if you were this audience, what questions would you ask?

The Mistake: I’m Going to Provide an Overwhelming Rational Argument

“Just the facts” is great if you’re investigating a murder. Insufficient if you’re inspiring action or driving change. It is a mistake to believe that a rational, logical, or well-constructed argument will persuade people to change what they think is in their own perceived best interests. You are going to need more than just the facts.

The Fix: Appeal to Their Hearts Too

Martin Luther King said “I have a dream.” He didn’t say “I have a plan.” Stories, vision, passion, vulnerability. These are the things that persuade people to change. Concrete, tangible, visual goals are what drive action.

Businesses need a higher purpose too. Maybe you’re not going to solve world hunger, but you should have a vision beyond just X percentage growth, or Y dollars revenue. Have the guts to stand for something. Something that inspires people to leap out of bed in the morning and eagerly embrace their work.

The Mistake: One Email Should Do It

I love email. It’s fast, it’s easy, and it’s cheap. It also provides us a record of what was said. Sometimes it’s important to have a record. Also I don’t have to ask people how their day’s going, or remember their kids’ names. But maybe that’s just me.

But words are only a small part of what’s being communicated. So for trivial or strictly objective communication (“Where are we having lunch?”, “Please send me the numbers for the third quarter.”) email works just fine. After that, the chance of miss-communication goes up exponentially. If you’re relying strictly on email to communicate, you’re losing out on the majority of your ability to influence. Email is efficient, but it’s ineffective.

The Fix: Talk to a Human

Mark Hortsman has an amusing saying (I paraphrase): “I’m glad to hear you want to work with people. All the jobs with trees and dogs are taken.” As managers and leaders, we manage and lead people, not email. If our jobs were to manage email I wouldn’t have to write this blog post.

If you need a record of what you agreed, write it down afterwards or capture it in your business execution software.

The Mistake: Everybody Sees the World the Same Way I Do

I love words and books, but not everybody has a childhood association with the written word like I do. Not everybody processes the world through words. There are five senses, not just eyes scanning shapes laid out linearly.

Words are a visual media, yes, but there are also photographs, drawings, movies, models, and sculptures. There are many visual media, but that’s just one of the five senses and one of many different ways to understand the world.

Persuasive, moving arguments invoke all five senses and more. They also invoke memory and emotion. We act because of how we feel, not because of what we think.

Last week I saw a dinner presentation was on project workforce management. The slides that accompanied the presentation looked like a random collection of numbers and letters thrown at the page. The presenter read directly from the slides. It was horrible. An audience member rescued the presentation with a simple metaphor:

There are two kinds of shoppers at the hardware store on a Saturday morning. The first kind has a list, knows what they need to complete the entire project, and gets in and out just the once. They spend the rest of the day executing the project, finishes early, and has a beer on the patio at the end of the day.

The second kind makes a trip to the hardware store every time they figure out they’re missing another piece or tool. With workforce management, project managers are trying to be the first kind of hardware store shopper. There. One simple visual metaphor and the jargon-filled, esoteric project management concept is distilled and clearly communicated.

Over simplification? Maybe. Understandable? Very much so.

The Mistake: I’m Busy, They’ll Figure It Out

We can’t manage time. We can’t manage five minutes and turn it into six. But we can decide what to focus on, how to manage ourselves, and how we spend our time. As managers we get things done through other people. Managing people take a lot of time and effort. Much more effort than managing ourselves, which can be a pain. If people did what they were supposed to, being a leader would be a lot easier.

There’s no point in being so busy that you don’t check in on a project, program, or initiative, only to find out in the last two weeks of a three month effort that you’re two months away from finishing it. Now you’re going to be spending the next two weeks fighting that fire.

Fix #6 Have a Rhythm

Getting things done doesn’t mean doing everything yourself. Getting things done means planning and delegating the work, keeping track of progress on a regular basis, and reporting on that progress. Clear responsibilities, radical transparency, and regular reviews drive accountability.

Consider maintaining a ”relationship” with the projects you’re accountable for, as well as the people you work with. Regular, habitual check-ins, meetings, or status updates are the best means of keeping a project on track.

Establish a cadence of business execution that lets you stay up-to-speed on what’s happening with all the work and your team, ideally once a week. Once a day, if that’s appropriate for critical, complex, or large projects. Make sure everyone is clear on what tangible, deliverable results they need to deliver by the end of each week.

Now you can verify progress, and make small corrections to get things back on track, instead of having to jerk the wheel to avoid the ditch at the last minute. All that does is scare everybody.

The Mistake: Lack of Focus

I’ve got a lot of renovation projects started around my house. We installed hardware floors eight years ago, and still haven’t put the baseboards in. The outside of the house is half painted, the garage needs new gutters, and I have the bricks but not the sand to re-lay the back patio so that it slopes away from the house instead of towards it. I started that job when I took the old wooden patio out. I don’t remember how many years ago that was.

There’s lots of things we could be doing, and yet nothing seems to get done. We’ve gone from doing a little here (let’s get an estimate on finishing the tiling on the back landing) to doing a little there (oops, the playhouse needs repair! Let’s turn it into a garden shed while we’re at it – the kids are all grown up and don’t need it anymore.)

It’s demoralizing really. Lots of activity, with no sense of progress. Companies and teams can suffer from the same organizational schizophrenia. When everything is important, then nothing is important, and nobody is clear about what to do next.

The Fix: Find the Big Picture

There’s a saying about how the cobbler’s children go barefoot because he’s too busy making shoes for everybody else. So I took my own advice. I stepped back to figure out what I was trying to accomplish overall. Then I picked one thing to do to get me closer to that.

Sooner or later we’re going to need to sell the house we’re in. The kids will all be moved out soon. The house is too big for just the two of us. We’re going to need to get our investment plus maybe a little extra out of it to find our little retirement cabin in the woods. We are never going to get there if we kept doing the same thing we are now, which is trying to come up with the perfect plan and budget.

So we picked one project that we know we can get done. We’re installing the baseboards, re-painting the walls, and moving around some furniture and pictures. This will free up some space so we can do other things. We’ve spent the last two weekends working, and the progress is tangible. At the end of today the pronouncement was “Let’s keep going!

The Biggest Mistake: Assume Your Message Is Getting Through

I have the privilege of working with both the executive and the management teams with one of my clients. Even between these two fairly aligned teams, intentions, communications, and messages get mixed up and lost. It’s actually sometimes entertaining, or it would be if you’re a disinterested third party. If you’re in the middle of it gets a little frustrating. Now imagine what it’s like for the foremen and workers at the front line?

The Biggest Fix: Close the Loop

Check your message is getting through. Talk to front-line staff. Walk the trenches. Practice the art of generous listening. Then adjust or repeat your message as necessary. Never assume that what you’re saying is what people are hearing.