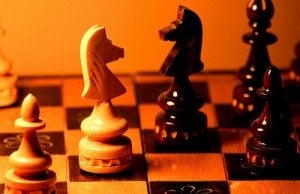 A useful analogy for thinking about business strategy is the game of chess.  In chess, players compete in a shared playing area both trying to win.  The strategy for winning is to position the playing pieces in a way that creates advantage over the other player, ultimately removing the other player from the game.

Great chess players take specific actions during the game.  They survey the board from above and look for patterns that indicate the intent of their opponent, as well as identifying opportunities for themselves.  They are willing to give up a weaker piece or position in one area to create advantage in another.  They are constantly driven by a singular goal – to win the game.  Further, in a competitive game, time is a factor and players need to chose when to take quick action and when to take more time to analyze the situation before making a decision.

In a similar way, smart business leaders take specific actions in leading their firms. They survey the competitive environment trying to identify the intent of competitors and anticipating changes in the market.  They make strategic decisions to mitigate risk, take positions of advantage, and focus on areas of greatest opportunity.  And ideally all decisions are made in the context of a longer-term objective.

As much as this analogy is instructive, it’s important for business leaders to also recognize how leading their companies is not like the game of chess.

Analogy can help in understanding business.  Whether we use the game of chess, sports or military analogies, all have their usefulness.  However, we must recognize the limits of these comparisons and take them only as far as they serve us.  In the end, the greatest leaders continually look for new perspectives to gain a deeper understanding of themselves, their people and their businesses.

Decisions in Uncertain Times January, 19 2022
The Results’ Four Cs of Extraordinary Teams January, 12 2022
How the Grinch Stole More Than Christmas December, 14 2021
Unleashed S4E8: Adam Grant – The Power of (Re)Thinking December, 2 2021
Less is More – Understanding “Decidophobia” in the Workplace November, 29 2021
Don’t focus on the result. Focus on the process that creates the result. May, 28 2019
Unleashed S4E5: Jim Detert – Choosing Courage November, 1 2021
Corporate Accountability: You Get What You Tolerate August, 31 2021
What Does the Christmas Eve Truce of World War 1 Teach Us About Culture? December, 18 2019
How the Grinch Stole More Than Christmas December, 14 2021